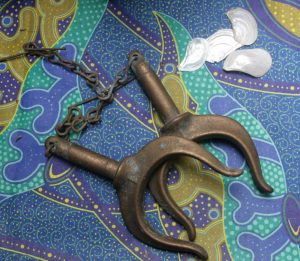 My song is for the rowboat hauled out for winter,
listing in a sea of leaves.  I love her lines,
the graceful beauty of her usefulness.  But even more
I love the way she carries the music
of my father, his summertime humming
and the ringing of brass oarlocks dangling from his hand
as we walked the tangled path pungent with huckleberry
and sweet fern in August heat.

Our syncopated footsteps
on the wooden runway, the slight lift and sway of the float
beneath us, slap-slap of running line on water
bringing the dinghy in.  My father’s slender fingers
worked the line, hand over hand, removing strands of eelgrass
and slimy mermaid’s hair, green, and matted.

And then
his easy rowing, skilled feathering of oars, their rhythmic turning
in the locks, a two-part pulse of leather and wood against brass:
back and forward, back and forward.  Between strokes,
from the oar tips a whispered staccato drips in tiny
running steps across the water’s surface.

Did we speak?  Maybe a little.  Mostly in silence we’d do
what was needed—unstop the sails and hoist them,
let go the mooring line, back the jib to bring the bow
around, and with sails filling slip gently out the harbor.

Strange–I remember always the setting out
rarely the homecoming, always a new beginning,
always another chance. 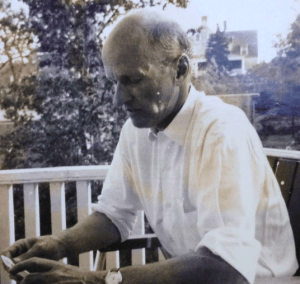