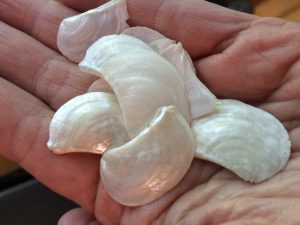 Gould’s pandoras in my hand

Most of the shells that wash up on a nearby beach are species familiar to me from my childhood: mussels in shades of blue like Chinese porcelain, clams of various species (surf, razor, Quahogs, among others), slipper shells (a.k.a. boat shells), lots of periwinkles, and the very occasional whole moon snail.

This year I have paid closer attention to–and started to see more and more of–what at first I took to be the pearly interior fragments of some larger shells. When I noticed that all of these supposed fragments were uncannily similar in shape, size, and location of a hinge, it finally dawned on me that they were likely their own species, simply one unknown to me!

So I looked them up in a field guide to seashells.

One of several species of the family Pandoridae and of the genus Pandora, these are known as Gould’s Pandora, Pandora gouldiana. Each shell half (called a valve) is nearly as flat as and not much larger than a guitar pick.

I find them quite lovely in their simplicity, their lightness of being, their iridescence, and the music they make when jingled in hand or pocket. The shell’s pearly layer is revealed only after the tougher outer layers have worn away.

Of course their name, Pandora, set me musing a bit. Yes, there’s the woman from Greek mythology who was entrusted with a box containing every conceivable ill the could plague humanity. And she opened it. (As a young girl, I never considered the implicit misogyny of this–another “blame it all on the woman” story.)

But the name, Pandora. . . . My two years of studying Biblical Greek long ago suggest that pandora in Greek would mean simply “all gifts”–pan  (all) + dora (gifts)–the good and the beautiful and the painful and the destructive. All of these gifts, all together.

When I checked my old Greek lexicon to confirm my memory about dora, I found a beautifully musical word nearby: dorophoria, meaning “the bearing of gifts.” In a flash the marvelous treasures of language and sound brought tears to my eyes.

One thought on “Meet Gould’s Pandora”